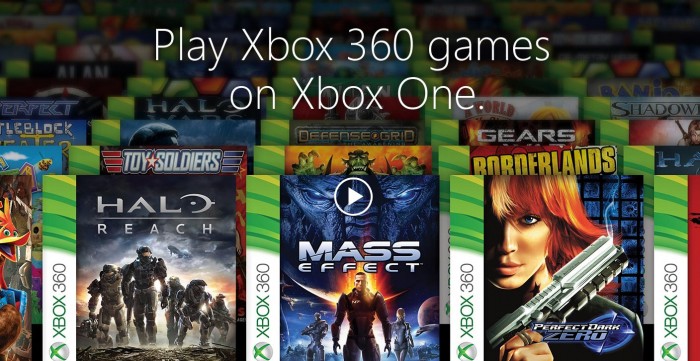 Ever since it was first announced at June’s E3 that the Xbox One would be soon offering backwards compatibility as a feature, I’ve been on edge waiting for this update to drop as soon as possible. Well the wait is now finally over as a list of the first 104 game titles has been revealed. The new Xbox One Compatibility Program will be released on November 12th, included in the Xbox One “New Experience” update. Not only is backwards compatibility coming with this upgrade, but this will also bring a new update to the console’s dashboard, and playability with your old 360 buddies – all powered by Windows 10

On November 12th, the New Xbox One Experience update will be available on your Xbox One. Go ahead and download that, and in your fingertips you now have the power to dive back into the older games that continue to make gaming fun! According to the video above, it should be a quick process to find and download the game that you need. If it’s on disk, pop that sucker in and the console should notify you that it is either compatible or not with the console and you can continue the process from there.

Not only will this update bring the joys of backwards compatibility of your 360 games to your XB1, but there’s even more in store for us. Other cool things about this update will be the ability to record with Game DVR, livestream your 360 games from the XB1 without further equipment, game and party chat with your old 360 friends, and even the ability to still earn achievements from your 360 games is all GOLDEN! The classic Xbox 360 guide will also be back while running compatibility mode (a feature that kinectless-I have missed). The break down the process, you will be emulating your Xbox 360 console games on your XB1, and from there you can livestream to Twitch and even record gameplay clips, while your game streams directly to your Windows 10 computer. Whoa, talk about being innovative!

One of my concerns is that I now have a bunch of downloaded games sitting on my 360, especially those gifted from Games With Gold. Will these be included in compatibility or must they require the disk? Then I remember, it’s 2015! Anything is possible and backwards compatibility with downloaded Games with Gold games has been confirmed. From the Xbox’s official website:

“Starting November 12, all future Games with Gold titles for Xbox 360 will be playable on Xbox One, giving you double the free games to play each month—two for Xbox One and two for Xbox 360.”

How cool is it that we can now get double the games! I’m sure you’ve already been doing this, but still. No need to keep switching back and forth between consoles. We can only believe that our previously downloaded Games with Gold games will also be compatible, if not right away eventually. If downloading from the cloud or a hard drive or such other games with gold method, the process should still be the same. Here’s to hoping that we both don’t run out of disk space anytime soon!

This is a massive list, and I’d actually like to mention that there are many games that are strangely omitted from the first release. Although, us beggars can’t be choosy. Some of the titles that pop out to me are Mass Effect, Gears of War 1-Judgement, and definitely Borderlands. We can expect many more games to emerge along the way including BioShock, Call of Duty: Black Ops, and even Halo Reach. As for now, enjoy!:

This list may or may not be all that impressive to you. My thoughts are, where are Mass Effect 2, Crackdown, Dead Rising 2, Grand Theft Auto 5, Tekken Tag 2 or even… Super Street Fighter IV? The current list seems pretty underwhelming as none of the games I was really hoping for made the list, but this is a decent first step. Besides all of that, It’s still really impressive to see this actually happening!

So what do you say guys? Ready to face that extreme backlog of games on your list? What games are you excited to see? And what are the few games that you’re dying to play backwards compatibly on your Xbox One?

Xbox One xbox one backwards compatibility