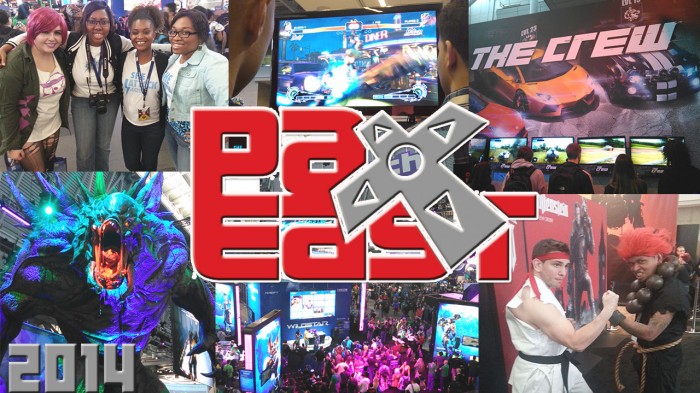 Attending PAX East 2014 has so far been my favorite experience this year! This year’s PAX had the full experience: A massive horde of gamers, new games we’ve all been dying to check out, developers and video game celebs galore, free swag, and all of the gaming panels you could ask for! This was my first time ever visiting and I may have been a deer in the headlights, but I wish to share my experience with you all with the many photos I snapped. Let’s get into it!

After a flight to New York, bus ride into Boston, and walk along the beautiful Boston river until my arrival at the convention center, I was ready. I whipped out my pass to prove my attendance to security and when they cleared me, I was officially in the wake of PAX East! Cosplayers were spotted from a few angles and I kept my eyes peeled for any recognizable gaming “celebrities”. Also my quest for loot was not disappointing upon entering as there was a big bucket of lanyards for PAX passes. I snagged a couple of those (souvenirs for the friends back home) and made my way to the main show floor. Once I reached it, I saw my life flash before me. I’d flown up to Gamer Heaven.

My mind was BLOWN! So many games, so little time!

First stop, LEAGUE OF LEGENDS! OHMIGOD! I made a b-line straight to the Riot Section. There were some familiar faces on stage and a speed artist working on live character designs. Highly entertaining. I made my way over to a smaller League crowd where I gave my best shot at winning some official Riot gear. I had to answer some trivia and give my best Brand impression to win myself a PAX ward skin, poster, and limited League lanyard. I spotted some amazing cosplayers around the booth including Bunny Riven, Trendamyre and even an adorable Frostfire Annie! So much amazingness in one little area. I stuck around for a little bit longer taking in everything with the other LoL’ers until I realized that I had some people to meet, including Nia, Jaleesa, and Gabby from SheAttack! I, painfully, had to walk away to check out the rest of the convention’s offerings.

Next, I did quite a bit of booth hopping. There were many companies and games at PAX. Present were Microsoft, Nvidia, Ubisoft, Wildstar, Bethesda, Curse, Astro, Machinima, and Undeadlabs just to name a few out of many. Also a TON of indie developers were on the scene with their awesome games. My top two favorite games I’m dying to play this year would be Evolve and Bethesda’s The Evil Within. Those were the booths I spent the most of my time.

Bethesda was pretty popping! The Evil Within was missing, but Wolfenstein was in full effect! We stopped and took a couple of pictures next to the infamous image and another couple joined us to have us take their photos as well. I wanted to stay in the line to play some but I enjoyed watching over the shoulder from the corner of an area. From what I saw the graphics look pretty badass and gameplay was much improved. It’s definitely not the 2009 version. The Evil Within section did have an awesome image booth where I was able to put myself into the madness. Pretty sweet if you ask me! Also, I was able to buy some collectible Fallout gear that I could only dream of! <3

Next I made my way over to the Evolve booth. MIND BLOWN for a 2nd time, I stood in line for a bit but it was clear that I’d be spending a good 3+ hours waiting to play. I knew that Nia and Jaleesa would be getting a hands on experience, so I’ll wait to check that out. As for what I did get to see was a huge Goliath, probably around 20 feet tall standing right above me. I caught a few matches over gamers shoulders and I knew that this will be a smash hit for gamers everywhere. It was amazing to see complete strangers band together with teamwork while they went in full effect mode to hunt and bring down the Goliath. Graphics looked beautiful, and the gameplay was appealing. It doesn’t look so much like Left 4 Dead and gameplay feels so much more unique. I’m dying to pick up this game!

My further journeys involved me checking out many gaming booths, especially a ton of indies, shopping at Bethesda for special Fallout gear, meeting up with gamer friends from all over the world, and chasing down cosplayers for snapshots. I wanted to attend a couple of gaming panels but had a much more fun time out on the show floor being amazed by all of the sites. There was a jousting arena set up in the middle of the show floor. I watched many friends knock each other down hilariously from the platforms. The Ubisoft Trials Fusion booth had a live motocross rider doing tricks in a cage, and Oculus Rift had a live demonstration where you could step into a bubble named the “Virtusphere” and experience the future of 3D gaming for yourself.

While I did not get to play many games, (lines were pretty long) I was able to check out Murdered: Soul Suspect and Ultra Street Fighter IV. These games are fantastic! Murdered: Soul Suspect was everything that I dreamed it would be, and since it was the same demo that I’ve seen streamed over on  IGN’s YouTube page, I felt like I’d already known what was coming. Nonetheless, the game looked great and should be a non-disappointing pickup for my collection. Ultra Street Fighter 4 was everything I dreamed it would be. I played 2 matches against others with my girl Poison. The gameplay felt smooth as ever, and while I feel some of Poison’s actions can be OP I can not wait for Ultra!

Another thing that I loved about PAX was being able to see all of the cosplayers! It may not be ACEN, but the few cosplayers that I spotted, I snagged shots of.

All in all, my PAX experience was amazing! I’m looking forward to seeing footage for PAX Prime and hope to attend again next year. I had a great experience checking out new game footage, getting my hands on some special games, meeting some great people and being in the presence of so many gamers was exciting for me. There were many things that I wish I got to see for myself, many pictures I wish I had taken and I honestly needed more than one day. My expectations for PAX had been pretty much fulfilled. It’s an experience that all gamers need to get a taste of! PAX Prime will be in Seattle in August, and there is also a new PAX South which will be held in Texas next year. Advice for perspective con goers: always opt for a full weekend pass if you can. You don’t want to miss anything exciting!