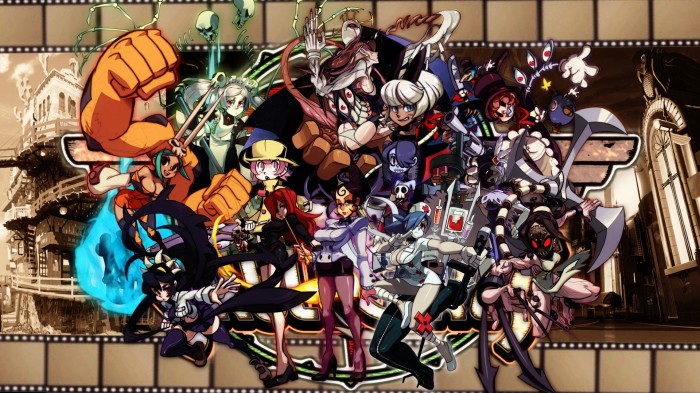 PlayStation Plus has been giving out some AMAZING games as of recently and Skullgirls: Encore was one of the offered games this month. I had to snatch it up! Not only is Skullgirls one of the more unique fighting games I’ve experienced, the Encore edition actually has some new features that I’m pretty excited to get my hands on. This may be a re-launch of the previous game, but with added new characters, updates, DLC, and features, this is going to feel like a much more improved game.

Skullgirls features a group of manic girls all fighting towards one goal – to defeat the Skullgirl and take the “Skull Heart” that will grant the holder their ultimate wish. However, if the wisher’s heart is impure, they will turn into a hideous monster – becoming the Skullgirl. Each character pursues her goal as it pertains to their ways of life, to make their own wishes come true. The game has a unique 1940’s Hollywood vibe that fits perfectly with its smooth jazz music. Each of the fighters are their own individual complete with unique skill sets, appearance, and most importantly – story. If we look at Parasol, a leader of an elite military group, she fights with a group of soldiers prepared to take the fall for her. Cerebella, a circus performer, wishes to have the skull heart to grant her the fame and spotlight she craves. Though the story mode is pretty short, following characters on their individual adventures in a nice touch.

This 2D fighter is basically an arcade ladder game. The fighting mechanics are so similar to Marvel VS Capcom as it’s extremely fast paced. A lot of the times you can get away with light, medium, hard kicks, and punches to deal some damage, but you’ll need to hit the training room to pull off impressive combos. This game has some of the coolest super moves I’ve ever seen. One of the cooler things with skull girls is that you’re able to fight with your character solo or with a team of 2 to 3 characters. The more characters, the less health they all have but it provides a way to come up with new strategies and fun experimenting with everyone’s skill set. This game is not one of the easier fighting games. You will need to brush up on your skills. There will be some game overs that you’ll have to toughen up through. I spent most of my time on the easy difficulty, a notch up from the sleepwalk mode and found myself getting waxed on the floor numerous times. If anything, this game will make you a better fighting game player. There is no in-game move list which can be a bit frustrating if you’re trying to learn anything. You will need to search everything online. All in all, I have a continually fun time every time I play.

The graphics of Skullgirls are just beautiful. The 2D animations are stunning and move very fluidly. It’s the prettiest fighting game I’ve ever played. Sometimes I find myself getting lost in how amazing everything looks. The sprites in the background look flawless and every character is detailed in many ways. Every skill and combo puts on a nice show to watch. Not once did I see a boring background – and don’t get me started on character design. Each character has the upmost detail in them (with the exception of Squidlgy, but I’ll get to that in a moment). Filia not only has that regular school girl look about her, but her deadly weapon actually lies in her hair! Painwheel makes you feel pain by looking at that poor gal with that huge wheel on her back. Get that girl some bed rest, please! Ninja nurses, decapitated cats, and even the ugly look of the Skullgirl when you meet her in the end battle, still while grotesque, looks so vivid. The audio is just perfect and the voice overs  fit each character’s voice perfectly. I can’t talk enough about how beautifully played the soundtrack fits with the action.

Encore brings a few new things to the table than the previous Skullgirls game. There is the addition of not just one, but 5 brand new characters to check out and there being the first male character of the Skullgirls realm and 2 new stages. The new characters are Big Band, Squigly, Beowulf, Robo Fortune, and Eliza. This is pretty neat given the original roster only had 6 playable characters to start. Not only did they add new characters, but there have also been some major upgrades in gameplay. This version not only fixed a couple of noticeable kinks in gameplay from fans of the previous Xbox 360 and PlayStation 3 versions.

What I love so much about Skullgirls is its crazy comical vibe. What games have you played recently where the girl’s hair becomes a large fighting monster or where a hat with arms can really kick ass? I’ve been a fan of the series since it was first released and I ‘ve put in a good amount of time on my Xbox 360. It’s funny because at first I was so biased toward this game. “Why they gotta be all girls and why they all gotta be half naked?” Yet, once you get past that you’ll see the unique style of each character. No they are not just big boobed bimbos bopping around, they are extremely likable characters with their own personalities. Playing fighting games on the PlayStation 3 is a new experience for me, but Skullgirls makes it fun to learn. It’s a technical game, but I feel that with training mode even the most basic players will be able to learn some good skills that will carry over to other fighters. My favorite character is Cerebella, which I had cosplayed previously at New York Comic Con. Skullgirls is one of my favorites. Give it a chance and add me on PSN if you’d like a sparring partner. All in all, Encore is a great version of the game. It needs more players online though.

The free DLC is limited so make sure to upgrade your original Skullgirls to Encore. New characters have a timed release so be sure to stay up to date. After 30 days, new characters will no longer be free.

Skullgirls: Encore is available to play now on the PlayStation Store and the Xbox Live Arcade.