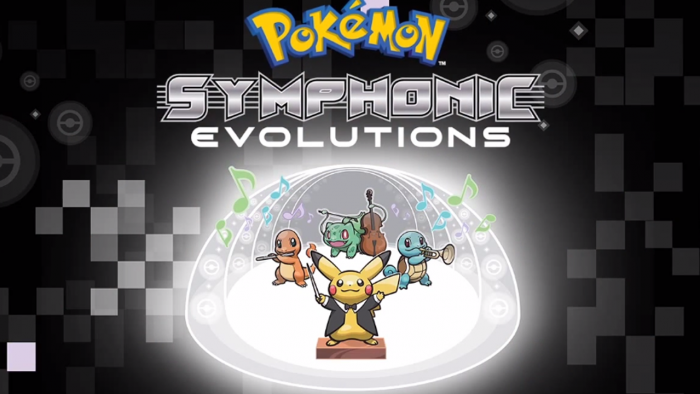 When you first think of symphony, I’m sure you’re imagining a fancy concert hall filled with many older generation adults scurrying along to find the perfect seating – soft whispering and small laughs coming from the many patrons leaving the bar as they scurry along to find the perfect seating. You’d probably also imagine a very special few sitting atop the balcony in box row seats with monocles attached to their eyes for their viewing pleasure and a stage filled to the brim with musical geniuses with a passion for classical music strumming and pounding their hearts away.

The Pokémon Symphonic Evolutions Concert however was nothing of the sort! We traded pea-coats and feathered headgear for Pikachu ears and Team Rocket shirts. For myself, and to the other Pokémon lovers out there, boy have I got a treat for you. The Pokémon Symphonic Evolutions Concert was a very unique experience and the ultimate gift for Poke’ fans of all ages. With a showcase of beloved favorites from each generation of Pokémon, you’re bound to fall in love with each piece of 8-bit music as it turns into an even more beautiful melody. Luckily, I was able to attend in Milwaukee, WI at the Riverside Theater. The experience was nothing short of magical.

Tickets ranged from the price of $25 all the way up to $75 if you wanted priority seats. When we first arrived we were excited to be amongst many other Pokémon fans. We imagined that we were going to be some of the oldest fans there, but to our surprise the group ranged from young tweens to adults in their 50’s and beyond. In particular, the group was certainly a more ‘mature’ crowd overwhelmed with joy, anticipation, and poke’ merchandise. There was a merchandise store in the front hall where you could buy a life-sized Pikachu plushy (well, maybe he wasn’t that large, but super huggable) for around $40, symphony posters were selling like crazy for $20, and the extremely popular Pokémon symphony shirts were selling for $30. That price was definitely worth it for the shirts as they were really vibrant and well-made. I didn’t want to miss out on nabbing one of those before I left!

Our seats were amazing! We splurged a little bit and ended up getting front row box seats – which were absolutely worth it. The stage being just a few feet in front of us provided a more exclusive view – although every seat in the audience had a wonderful view as well. As we waited for the performance to start, a giant screen in the middle of the theater entertained the crowd with interactive games like “Who’s that Pokémon?” as we joined a chorus of eager fans shouting “Pikachu”, “Gengar”, and even a “Chespin” popped up somewhere in there. Scanning the crowd around us, we were surrounded by many eager fans donning every bit of poke’gear you could imagine. We also spotted a few cosplayers all dressed as Pokémon, Trainers, Team Flares and there was also a woman there dressed in a Blaziken-styled dress – which was awesome, but possibly unintentional. The enthusiasm created an atmosphere that any Pokémon fan would to want to experience.d

Upon the stage, the orchestra members filled their spaces as the lights began to dim. A beautiful young lady stepped upon the stage, Susie Seiter, as she would be our conductor for the evening. With a wave of her magical wand, we all fell into a trance as the Pokémon theme started to play out right in front of us. On screen a montage featuring every single game title scrolled on as we felt our hearts beat out of our chest to such a sweet melody. Every single feeling swept up again from the joy of rushing home after picking up that new game and gently cradling it into the case of our favorite Nintendo console, the feeling is now so real. For now the show was beginning!

Throughout the night we listened to an amazing setlist featuring around 3-4 songs from each Pokémon video game. My most favorite songs from the night featured:

As the concert came to an end closing with its last song, the producer for the Pokémon Symphonic Evolutions Concert, Jeron Moore, stepped out on stage. He gave us thanks for coming out and being Pokémon fans and revealed that there was of course and encore! As the crowd all cheered and applauded for such a beautiful performance he then announced our two encore songs. No, it was not the Poke’ Rap – it happened to be something even cooler. First, was a fan favorite from the anime “Gotta Catch ‘Em All.” He called, “we need everyone to help us out with this one” or something along those lines. We all knew what to do. In unison, we followed along to every word of the song that’s stuck with our hearts since tuning in every early morning to catch the show. The last encore was even more beautiful as this song was presented to us from someone even higher above, the creator of Pokémon wanted us to hear and enjoy the beautiful song of Kiseki. With that, ended an unforgettable evening.

This experience was nothing short of fantastic and is an experience you should check out for years to come.

To view a schedule of where the next Pokémon Symphonic Evolutions Concert will be performing, check out the official Pokémon website.