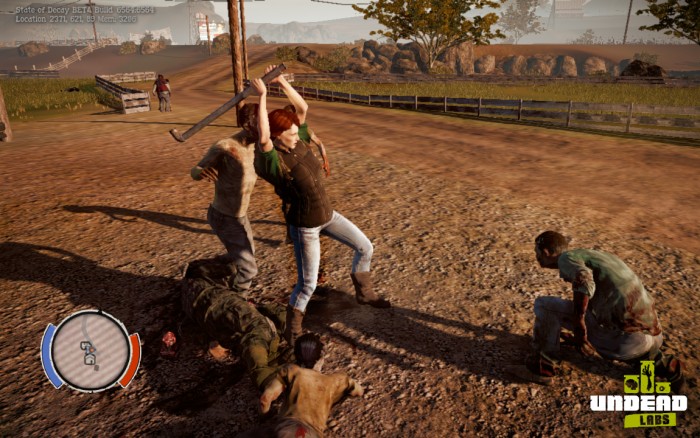 If you’ve ever wanted to experience what it’s like to be in the midst of a zombie apocalypse, Undead Labs’ State of Decay injects you right into the middle of it. Me being a huge zombie fan could not say no to another zombie game. But is it just another generic zombie shoot ’em up? Not even close! This game differs from every other Zom-game such as Left 4 Dead, Dead Island and even Dead Rising by putting you into an open world as the survivor. It brings relevancy into the played-out zombie game theme. This game is your story affected by your decisions while literally struggling to survive day by day. Supplies are few, survivors need help and infestations can sometimes get wild.

State of Decay is that open-world zombie survival game that you have been waiting for. While you will receive that satisfaction for running over zombies in your vehicle, you are living out what you would do in real life if this became a thing. The story begins with Markus, your average guy on a camping trip with two other friends. Markus and friends happen to be outside hunting when the apocalypse occurred. Upon the unwanted approach from another “camper” trying to eat out their brains, the trip started to take for the worst as the world starts to crumble. From there you meet up with another survivor, who leads you to a gated church community as you then are left to start to face the reality and rise to the occasion. This game puts you straight into the game where your decisions take a toll on everyone. Not only are you playing as one character, but you are able to play with all able-bodied characters available. While this is a game, many things are taken into account such as how your stamina, health, tiredness and such other pointers.

The freedom of exploring, looting and inappropriate zombie bashing is right in your hands. State of Decay is based highly on personal player action while you set out to maintain defenses, keep your community under control and build good morale. On your quest for survival, there’s a never-ending slew of dilemmas both at home base and in the outside world. Whether your group is complaining about not having enough supplies, bickering with each other, or mourning a fallen ally, it’s relevant that you need to consider the needs of your community, unless you want them to turn on you. The bold decision-making is left in your hands. There are two major factors in this game: Main Missions and Community Satisfaction. Scavenging takes a large role in this game while somebody’s got to get the supplies, and hopefully make it back home.

This game isn’t perfect. I’ve run into a glitch that kept me from progressing in a side mission. I’ve seen zombies float through walls and hump the concrete.  A.I. can jump in the way of your Molotov every once in a while. The frame rate loads textures slowly sometimes, especially the landscape while driving. There is some uninspired dialogue which gets annoying after hearing the same 2 voices after supply runs. The couple of issues the game needs to improve on are just minor little things. While scavenging for supplies, once you find a stack of materials, your rucksack is completely filled. The only way to drop the supplies off is to head all the way back to home base (not your outlooks) to dump off the supplies. While realistic, this is an annoyance. There are pickup trucks in the game that should be used to carry and transport multiple bags. All State of Decay fans would LOVE this option. Clearing the streets sometimes would be much easier if you had the option to bring an ally along with you, but the game only allows this with few random missions. The use of multiple survivors would be greatly appreciated. It’s a small hassle that can easily be fixed.

State of Decay not only satisfies players with the destruction of the zombies, but gives them a sense of heroism. You aren’t just living out a pre-planned story, you’re creating and determining your own fate. Missions expire sometimes, allies may die and some get saved. This is all up to the player’s choice. You have your community to protect and build up. You can be a leader or an outlaw. The open world is immense and there’s always something to in this game. The initial fear that happens once nighttime approaches and the fear of running into those scarier zombies always creates a fun factor. The choices and outcome of what happens in the game will certainly test you. State of Decay brings a unique spin to the classic survival story we’re most used to. The game has its minor bugs and somewhat clunky combat, but yet it’s still SO enjoyable and addicting to play making it a most favorite zombie survival game to date! It had been a part of my top games of last year and I can’t wait to see what Undead Labs will bring to us gamers in the future! It placed a spot on IGN’s top 100 games of this generation for a reason!

You can start playing State of Decay right now on Xbox Live Arcade and PC. You can continue the survival adventure with both DLC in Breakdown and soon releasing and announced at PAX 2014, Lifeline coming soon next month! For more information, head on over to Undead Lab’s main site.

Played for over 64 hours