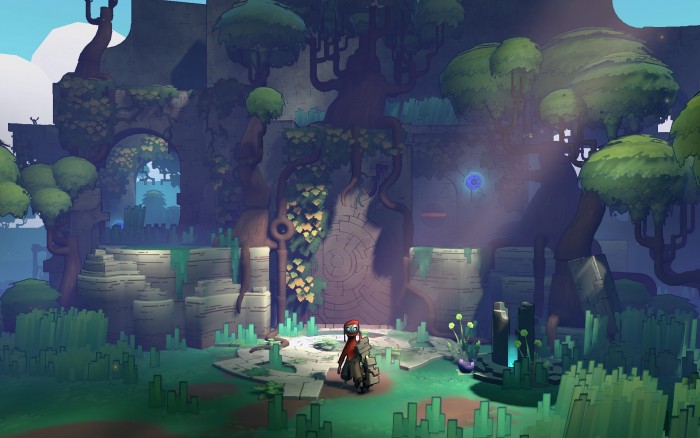 HoB is a beautiful, new adventure game that I think you will all end up enjoying. It displays itself in a stunning to look at world, filled with some uniquely designed enemies, and all with an interesting main character leading the way. When I was offered the opportunity to exclusively play the game and talk with Runic Games developers at PAX Prime this year, of course I was ready for this. Runic Games brought us Torchlight, one of my favorite multiplayer action-RPG games. Now let’s see how they will impress with an immersive single player experience.

Within my 20 minute playthrough, I will say that HoB was one of the funnest games I’ve sat down with. While the game feels comparable to a Zelda Adventure or even Journey, Hob stands alone with it’s unique gameplay and style. I spent time exploring the world, hopping from cliff to cliff, used different powers to unlock gates and portals, and of course, spent time sword slashing up enemies. Beyond the beauty in this game, I really enjoyed the immersive feeling that the player experiences. The world is broken, but yet alive in so many ways. Things in the distance move, twirl, unwind just to eventually come together again. Everything that looks far away can be accessible depending on how far you want to go and explore.

While the story and origin of our main hero remain a mystery, this is what I’ve gathered so far. Our main character wield a gigantic iron fist which has a couple of interesting powers, such as pulling objects closer to him, moving/using things out of sight, and also allows our character to swing from certain objects to objects. It’s not known yet if he’s a good character or not, but he looks he could be a sweet little guy. Combat in the game was another one of my favorite features. It’s smooth, fluid and nothing to really overthink. You had the ability to dodge attacks, and pull out your sword whenever you wanted to thrown down with some baddies.

I enjoyed that the game while perfectly coupled with exploration and puzzles, never felt overwhelming. No obstacle ever seemed impossible to get through. Failing just gave me the drive to continue and figure out how to get past the hurdle. Honestly I tend to get frustrated with platformers if I have to continually repeat my steps over and over, but in Hob there’s always a glint of hope that it’s possible to move on even if you keep making mistakes. This game doesn’t have one super obvious and highlighted path to take. You could venture down different paths to get to the same place, but for demo purposes I had a little guide that would appear whenever I ended up stuck for a bit too long. I enjoy being able to make a few mistakes and getting lost every once in a while on my own terms.

Sound in HoB is also gorgeous as I found the music design made the experience even more enjoyable. There wasn’t a goofy soundtrack constantly blaring in the background. If anything, the music played at all of the right moments and created a suspenseful ambiance. I remember one part specifically. My character stumbled upon a new mysterious area. Immediately I saw these gross purple globs of goo sitting on top of the ground. “What is that?” I thought, and soon I was making my way over to stand on top of it. Then, right from behind it, a HUGE finger claw-like enemy nearly poked my head off! The noise of it winding up for attack shocked me enough that I could react before facing a tragic death. That memory alone makes it one of my favorite parts of the demo.

All in all, my experience with the game HoB was fantastic. You can definitely say that this game is at the top of my want list!

Watch the video below to check out our exclusive Gameplay Demo with Runic Games Developers!:

Hob will be available in the future on both PC and consoles. For more information on HoB, please visit the HoB official website and follow Runic Games on Twitter for updates.