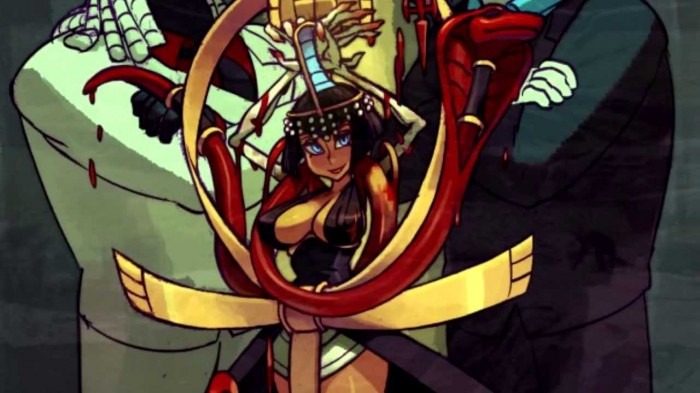 Skullgirls happens to be a beautifully animated 2D fighting game and with so many recent changes with the company, new developer, and new distributors, it seems like there’s always something changing with the game. One thing remains the same though: we want MORE! And here we have it. Skullgirls Encore will officially be making its way to the PS4 and PSVita later this year!

Lab Zero Games CEO, Peter Bartholow announced this on the Playstation Blog: “Very little has been constant during Skullgirls‘ two year existence – after all, the game has changed distributors and even developers. But one thing has stayed with us all this time: people asking us to port the game to PS Vita and, more recently, PS4. We read your comments, we took them to heart, and we’re finally making it happen: Skullgirls Encore will be coming exclusively to PS4 and PS Vita later this year!”

And just like that, the PS4 and Vita collection gains another epic fighting game addition. This new version of Encore will be complete including all DLC (Characters, Colors, Stories, and Stages), New “All Play” multiplayer game lobbies, extensive art galleries and even awesome support for PSTV & the PS4 dual shock local controllers. Sounds like a great steal for the Skullgirls Fanatic or those willing to step into the ring. There’s no word on pricing or exactly when this game will come out but we’re hoping for Fall/Winter. Fans also eagerly hope for a crossbuy, but that’s probably not gonna happen.

Eliza looks like she’s going to be a beast in this game. A couple of things have been changed on her from debut including the use of blood mechanics. To anyone who does not know, Elisa is an Egyptian themed character. She uses the blood to keep her parasitic beauty alive. During the AX Panel, lead programmer Mike explained to us why the blood has been limited and mostly done away with. Being the odd type of particles that blood is made of, it’s typically way too difficult to program in the form that were were looking for. I’m okay with this new change because just check out how badass Elise is even without it!

As you can see her move-list is still a work in progress, but the hype is real! I must say that I’m obsessed with her dash animations and look at those combos! Her special where she makes her skeleton parasite, Sekhmet, step out to finish the job is too cool. Makes for good combos. Each character in Skullgirls has a very unique set of personality and Eliza’s just tops the roof! Eliza will be available later this summer and free for the first 3 months.

Earlier this month, our beloved Skullgirls team stopped by Anime Expo in LA, and I had the honor to be one of the hundred lucky fans to have been present at their Skullgirls Encore: AX Panel! Not only was I sitting a few feet in front of the Skullgirls crew, but I was able to get a whole bunch of information on of my most beloved fighting games. Tons of fans waited eagerly amongst the crowd. Lab Zero wholeheartedly loves their fans more than anything, constantly spoiling us with what we want. They shared with us the process of creating Big Band, which was a long but rewarding one, Concept Sketches for Beowolf our soon to be new fighter, and even spoiled us with a peek at Robo-fortune’s look! It was a blast and I had a great time. I nearly died when meeting Erin Fitzgerald (Parasoul) and Danielle McRae (Painwheel)!! If you want to check out the full AX Panel check it out here on youtube thanks to the user MSP.

To check out more Skullgirls information including a look at Beowolf and Robo-fortune designs, check out the official Playstation blog.