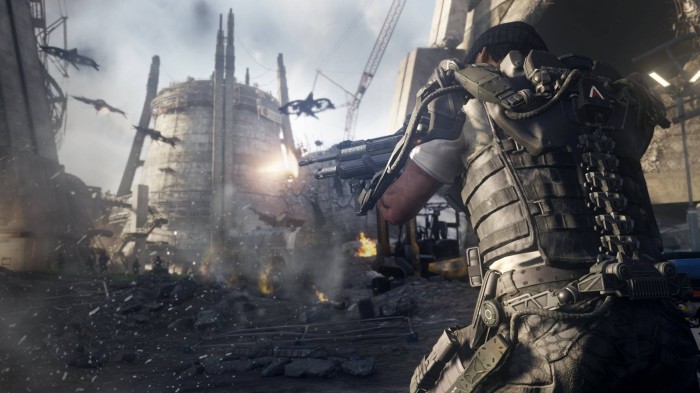 Call of Duty is likely the most talked about FPS game of all time. The series has had some hits, some misses, and some gamers are nearly bored to tears with the same old game. Finally, we may just have been given an antidote to this illness. Activision has revealed the trailer to the latest entry in the series – Call of Duty: Advanced Warfare! It’s shaping up to look pretty interesting!

I’m all for Kevin Spacey demanding me to go out and take action. I’ll do anything you say Mr. House of Cards.

If that trailer didn’t excited you in at least some way, watch it again. Admittedly, I watched it pretty pessimistically at first thinking, “Oh god, another Call of Duty,” but after having a second look, some things did pique my interest. What does seem refreshing is that we’re not entirely being “the good guys” this time around. The trailer opens with Spacey’s character, Jonathan Irons, claiming that people don’t want democracy, but they want someone to protect them while enforcing the rules. This sounds pretty feisty. What you’ve seen in the trailer was a bit of what we’ve seen in almost every single Call of Duty trailer, but even better! A showcase full of explosions, a futuristic spin on the traditional war story, introduction of new abilities, technologies, Kevin Spacey, oh, and even more explosions! Though I’ve been disappointed in the current direction of the series (looking at you Ghosts), this game trailer has caught my full attention.

Activision sums up the gist of Advanced Warfare here:

“Call of Duty: Advanced Warfare jolts players forward in a groundbreaking experience that’s ripped-from-the-headlines-of-tomorrow, envisioning a future where both technology and tactics have evolved to usher in a new era of combat for the franchise. Set in the year 2054, a private military corporation (PMC) has emerged with the power to rescue humanity from a devastated world struggling to rebuild after a global attack on its military and infrastructure. You are the advanced soldier. Empowered with new, cutting-edge exoskeleton abilities, technological advancements, and high-tech gear, players join the ranks of a highly-trained, specialized unit committed to restoring order in a state of advanced warfare.“

There’s MORE than just a couple of interesting things in this trailer. For starters, the Exo-Skeleton suits looks pretty bad-ass. Not only is it said to make the wearer faster and stronger but it will also awaken an all-around better soldier. Next, let’s look at those different forms of armor. It looks like the lighter version is for agile mobility, then there’s the 2nd form that looks like it’s a much more durable armor, and the third one – don’t even get me started. It’s like Mech Gear with a gattling arm! Also, if you pair that with the jet pack jumps, wall climbing, and the cloaking ability, we’re in for a real treat. I enjoyed Titanfall so much with it’s parkour, running up the side of walls, and riding titans so much that I’m really glad to see some influential features in this Call of Duty. I hope to see some more verticality with these new maps. I can see the invisibility option being especially useful in objective type game modes. I am too excited for this.

Let’s talk more of the technology and equipment. It looks like we’ll have a couple of other cool things such as portable cover, infrared grenades, new drones, hover vehicles, and that cool spider tank. What more could we ask for? This could be a huge turn around for competitive gamers such as myself.  I doubt that most of this awesome stuff will actually make it into the multiplayer,  but it does make the campaign seem much more appealing. While Call of Duty is not known for having groundbreaking campaigns, it’s still setting a standard for most multiplayer shooters out there.

I’m giving you one more chance…

Most of us have grown quite bored with the series. Call of Duty: Ghosts was the first CoD game I skipped out on. It just lacked the enjoyment that some of the previous games brought me. It was the first time I realized in my CoD gaming life that I was officially done with the series. Why am I going out to Gamestop to pick up this copy of the game, that will probably look, feel, and play the exact same as Call of Duty: Black Ops or Modern Warfare 3 – games still sitting on my shelve at home? Why do I keep doing this to myself and my wallet? I’ve been a fan of the series ever since Modern Warfare 2 caught my atention and I have great memories with Black Ops – my first competitive gaming experience. I even competed in the PMS clan doing game-battles and tournaments. I love the hell out of that game. Since Ghosts did not have that special edge, Advanced Warfare does look to be taking a step into the right direction.

Are you ready, soldier?

I can bet that this game is going to feel like a much more enjoyable shooter experience. Giving us so many new options to play with, even if the trailer is just cut scenes from a campaign mode. I’m pretty pumped to hop in. I’m hoping that I’ll have an Xbox One in time for purchase since the game is intended to be played on the next gen. We’ve been waiting for something new and this may be just what we were looking for. There’s no doubt that this game will sell because it is Call of Duty, but I’m officially happy to declare that I’m super hyped for this game. Hopefully we’ll see some mind-blowing stuff at E3. Sledgehammer Games, I’m counting on you!

Call of Duty: Advanced Warfare is scheduled for release on Xbox 360, Xbox One, PC, PlayStation 3 and PlayStation 4 this November 4th.